CHANDIGARH: In the run up to International Day against Drug Abuse and Illicit Trafficking to be observed on June 26, the Narcotics Control Bureau, Chandigarh in association with Chandigarh Welfare Trust and the Chandigarh Police, launched ‘Nashe Se Azadi’ campaign to create awareness regarding the ill-effects of drug menace on individual, society, nation and the world.

On Sunday, the residents of Chandigarh pledged against drug abuse, before the road run was flagged off in which more than 400 people participated. While a 200 metres run was organised in the Under-10 years categories for both Boys and Girls, a 3-kilometre run was held in under-18 category. Similarly, Road Relay was organised in 4 different categories, including Under-14 and Under-18 age category for both boys and girls, while winners were awarded with medals. The event also featured a Bhangra Performance and Zumba Performance by the volunteers of the CWT. While the activities over the next fortnight will include Neon Run, Street Plays, Essay-writing, Painting, slogan-writing and debate competitions, the CWT plans to continue its endeavours against the Drugs all year round.

Speaking on the occasion, Vinay Pratap Singh, Deputy Commissioner, Chandigarh said, “Drug addiction is a bigger problem than any other disease, for it affects the entire society and not just an individual. The war against drugs is an ever-continuing one till the menace is rooted out from society and in this mission, every single citizen, from children to senior citizens, are our brand ambassadors.”

Praising the efforts of Chandigarh Welfare Trust, Singh said that the Trust has been working for Chandigarh and its people in the fields of education and environmental protection, and now it is working shoulder to shoulder with the administration as part of this anti-drug campaign. He hoped that this campaign would yield meaningful results.

Asserting that it was the collective responsibility of the community and society to protect and prevent our youth from drug abuse, S. Satnam Singh Sandhu, Chief Patron CWT, said that the CWT is committed to effectively propagate its multi-pronged mission of spreading awareness against drug abuse, rehabilitation of addicts and ensuring their dignified return into the mainstream. 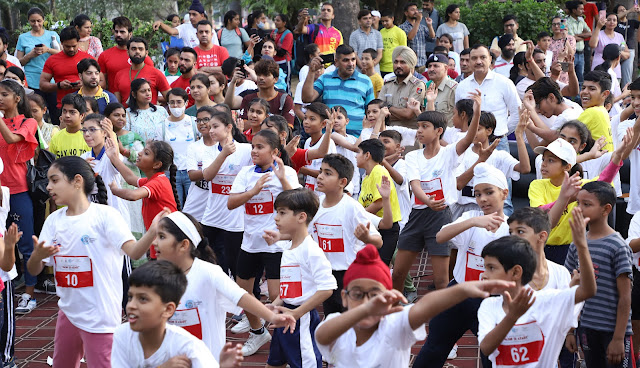 “Large scale initiatives will be taken by CWT to provide proper guidance to the youth by promoting physical and mental health and focussing their energies on meaningful and recreational activities. Our counsellors will hold counselling sessions in all schools of Chandigarh, especially in its periphery, along with quizzes and debate competitions. Our volunteers will organise Street Plays in villages, whereas we will also roll out the Youth Ambassador Program in all the schools of the city beautiful against the drug menace,” said Sandhu, also Chancellor, Chandigarh University, adding that this initiative will continue all year round.

“Chandigarh’s unique geographical location makes it not only the capital of Punjab and Haryana, but also closer to many other States. Apart from this, Chandigarh being an education hub, also has students coming from all parts of the India. These factors make the problem of drug abuse even more complex and hence there is a need to keep more vigil in the City Beautiful,” said Meena.

Meena said that Chandigarh Police has been very strict against the drug abusers and traffickers and that is one of the reason behind the increase in instances and quantity of drug recovery in Chandigarh and urged the youth to neither take drugs, nor let anyone else take drugs.

Underlining the scale of drug abuse in Chandigarh, Amanjit Singh, Zonal Director, NCB, Chandigarh said that Drugs are a big issue in the city and there is a need to make collective efforts against this menace, more than ever.

“The common perception is that drug abuse in Chandigarh is not as big a problem as it is in other states such as Punjab. However, things are not like this. In fact, given the size of the population, Chandigarh witnesses more drug abuse than other states,” he said.

“This is a huge number. In comparison, from Punjab, we seized 4668 KGs of drugs and 5,28,097 capsules in the same period. This put Chandigarh’s drug share to 22% of Punjab, even while its population is merely 3.8% of Punjab’s,” said Singh, as he appealed to people to keep a close vigil on their near and dear to ensure that they don't fall into the drug abuse trap.